Miken is a benchmark when it comes to manufacturing great baseball bats which always perform at the plate. No surprises therefore, that the new 2016 Miken Psycho Maxload has become one of the most demanded bats of the year. Miken Psycho Maxload is one of the best-selling bats for slow pitch softball this year. The 2016 version, a model in the Psycho series, has seen some fantastic performance upgrades from the bat’s older version. Miken bats are all made in the USA, with some of the most incredible and high-tech tools and techniques. Similar cutting edge methods have been used to produce the Miken Psycho Maxload 2016. This makes it one of the most advanced bats in the game. The 100COMP, revolutionary HPI technology and PWR 360 are just some of the incredible features installed on the Psycho Maxload, which set it apart from the rest. This is one bat which guarantees power and durability. 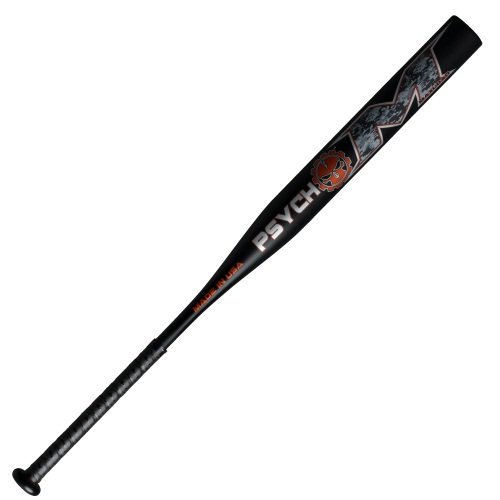 The 2016 Miken Psycho is a slow pitch bat. It is made and designed specifically for softball. This bat is ASA certified.

The Miken Psycho Maxload bat is 100 COMP certified. This means that the bat is made wholly from premium aerospace grade carbon fibers throughout its entire length. This gives the bat unbeatable durability, and the carbon fiber build gives it unmatched strength. Players will be able to feel the raw power in their hands when they grab one of these bats and step up to bat.

The Miken Psycho Maxload has been nothing but praised for its strength. Coupled with the 100COMP build, the bat features the PWR 360 composite technology. This latest technology in composite structure has been setting the benchmark for powerful composite bats and it guarantees performance in the Psycho Maxload. It gives the bat a triple wall structure and an even circumference at all points in the barrel. Power resonates through the bat with every hit.

The Psycho Maxload is a one-piece full composite bat. It has a 2 1/4" barrel diameter and a supremely designed 14 1/2" barrel length. The long barrel enables players to generate plenty of torque. Its one-piece structure and precision-engineered design gives the bat a large sweet spot. This also makes the bat very stiff with minimal flex. As a result, the bat is more energy efficient and can blast the ball off far into the stands. Another heavily end-loaded, full-composite bat is the DeMarini Stadium CL22, which is another of the best softball bats of the year.

Miken’s 2016 Psycho Maxload is built with the ground-breaking 750X High Pressure Infusion (HPI) technology. Super tough and durable epoxy resin is injected at extremely high pressures into the folds of the elite grade carbon fibers. This creates a material of inconceivable strength and longevity. This demonstrates the detail with which Miken crafts their bats, which gives players and professionals the confidence to use the Psycho Maxload.

This bat isn't called the Maxload without reason. At the tip of the barrel, Miken has added an additional 0.5 ounces to max out the load at the barrel end. The Psycho Maxload has redefined the way composite bats should be made. Players can now expect to annihilate the 52COR balls used in the ASA leagues without even breaking a sweat.

The Miken Psycho Maxload can be hard to keep in control when swinging due to its bulkiness and end-load, but also due to the absence of a handle grip. An external grip can thus be attached to the bat handle for more control and comfort.

1. Does the bat come with a warranty?

A. Yes. The bat comes with a one-year warranty

2. Is the bat alloy or composite?

A. The bat is a full composite bat with 100COMP certification

3. Where is the bat manufactured?

A. The 2016 Miken Psycho has been manufactured in America

4. Is the bat certified for USSSA?

A. No. The bat has only ASA certification and is suitable for soft-pitch softball

The 2016 Miken Psycho fights for the title of being the best softball bat in the game and throws a pretty solid punch. The bat has herculean strength, insane durability and can generate unbelievable swing force. Built with the latest and most advanced technology in the game, the Miken Psycho Maxload redefines the way composite bats should be made, and the way they should perform.