DeMarini is a household name in the world of baseball, and it is renowned for producing top-notch bats for all formats of the game. The 2015 DeMarini Flipper Aftermath OG is their release for the softball game, and the bat has already become the dominating force in the softball leagues. The DeMarini Flipper Aftermath OG is a hybrid bat with a unique design. It is brimming with power and brute force to smash balls into the stands and is also equipped with some of DeMarini’s up and coming baseball innovations. This high-tech, all-power bat is certainly one to be feared at the plate. 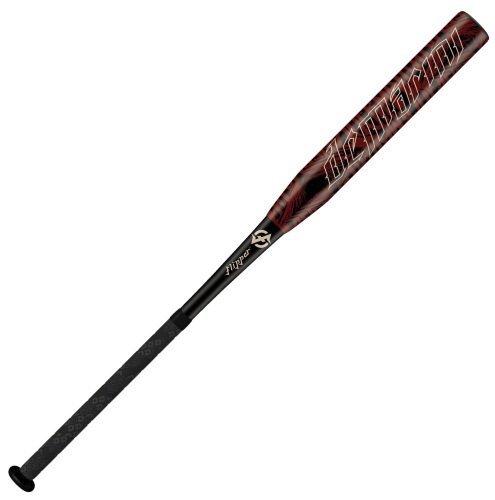 The DeMarini Flipper Aftermath OG is an exclusive softball bat. It is approved for use in the ASA League.

The 2015 DeMarini Flipper Aftermath OG is made of a Divergence Composite barrel, which makes the bat very strong. The composite material has a healthy sweet spot to aim for as well which further strengthens the bat’s rep at the plate. The Divergence Composite has two layers, with an air-gap in between, which maximizes barrel flex. This air-gap creates a trampoline effect of increasing the forward momentum and energy, while also making the sweet spot super-responsive.

The DeMarini Flipper Aftermath OG has a SC4 alloy handle which makes the bat stiff and complements the composite barrel’s strength. The SC4 alloy is designed to ensure none of the energy of the swing remains trapped in the handle and that all of it is transferred into the barrel. This increases the bat’s energy efficiency and increases the distance you get on your hits.

The DeMarini Flipper Aftermath OG 2015 comes with one of DeMarini’s innovative technologies in the Dish End-Cap. This end-cap is attached to the end of the barrel of the bat and has a concave shape which helps to redirect the energy in the barrel back towards the sweet spot of the bat. This feature allows the bat to pack quite the punch and sets it apart from the other average softpitch bats.

Another latest innovation is seen of the DeMarini Flipper Aftermath OG 2015 is DeMarini’s exclusive RCK Knob. This RCK Knob is attached to the barrel and ensures great comfort and ease for any player holding the bat. The RCK Knob perfectly acts as an ergonomic grip by complementing the shape of the player’s bottom hand, allowing for extra force in the swings. The 2016 DeMarini Flipper USA is another DeMarini hybrid bat which features the RCK Knob.

The DeMarini Flipper Aftermath OG 2015 has been scrupulously designed for perfect performance. The bat has a 13” barrel to maximize swing momentum and torque. The handle of the bat is ultra-light alloy and features an uber-thin 0.6mm grip. The hybrid design of the bat makes it unique, and the alloy handle somewhat reduces the bat’s weight.

The 2015 DeMarini Flipper Aftermath OG is only approved for slowpitch play and requires a slight break-in. Use only standard slowpitch softballs for about 20-30 hits to break in the ball and get a feel of the accuracy with the bat.

1. Does the bat come with a warranty?

A. The bat comes with a one-year warranty

2. Is the bat composite or alloy?

A. The bat is a hybrid, having a composite barrel and an alloy handle

3. In what leagues is the bat approved?

A. The bat is approved for play only in the ASA

4. What is the bat’s barrel dimensions?

The 2015 DeMarini Flipper Aftermath OG is a great softpitch bat boasting some of DeMarini’s best features and technologies. The bat is great for power hitters with a very strong and accentuated sweet spot, which hits the ball into light-year distances. However, inaccurate hits aren’t accounted for, and impact shocks can be a problem.